Kay Roman is one of the most talented indie pop artists in Philly right now. She sat down with us to talk about her favorite project to date, her fast-approaching tour, and upcoming EP "Dumb Whore". 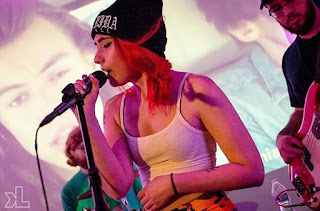 How would you describe your music and your style?
I would describe my music as indie pop.

Where are you from? How did growing up there impact you?
I'm originally from Oakland, NJ.  Growing up there definitely made me the person I am today, because it's such a small town.  You don't realize it until you move, but everyone's hometown is actually such a huge part of who they are.  That's actually what my song 201 is about.

What are some of your biggest inspirations, in your life and in your music?
My biggest inspirations in life would definitely have to be my parents.  They worked so hard their entire lives and are some of the most positive people I know. Musically, my biggest inspirations are Laura Stevenson and Lights. Laura Stevenson creates some of the most beautiful music I've ever heard and almost all of it is about depression and existentialism, which are things my mind battles with every day.  Lights is such a strong woman and creates art with so many different mediums that she inspires me to exit my comfort zone every day and to do my best. I also love both artists' finger picking style of playing guitar.  I often try to emulate them when I'm writing.

When did you first begin making music?
I started writing songs when I was four just messing around, but when I was ten I picked up a guitar and started to take writing more seriously.  It wasn't until I was fifteen, though, that I started playing shows and showing people my work.

What are some of your favorite artists/bands to do shows with?
Feeny, Machines Never Forget, A Boy Named John and Actually, I'm A Ghost

You dropped your most recent project, Love, on Spotify in August of 2018. Tell me about the making of this song and what it means to you.
Love is my favorite song I've made so far.  It is the first purely pop song I released and reflects on who I am as a person these days much better than the other songs.  It was produced by Stone Sneakers and recorded by Jamie McClanahan at the Audio Faktory.  The song would not be what it is without the two of them and I'm truly so happy with how it came out.

What can we expect from you in 2019?
2019 is going to be action packed! I'm releasing my second EP titled Dumb Whore, making a music video for love, and going on my first tour! I also hope to play A LOT more in Philly now that I live in the area!
My upcoming shows are as follows:
March 8 - The Meatlocker - Montclair NJ(acoustic)
March 15 - Boontunes - Boonton NJ
March 18 - Springwater - Nashville TN
March 20 - Westside Bowl - Youngstown OH