LiMM'S 'THE STATEMENT' - NEXT UP APPROVED 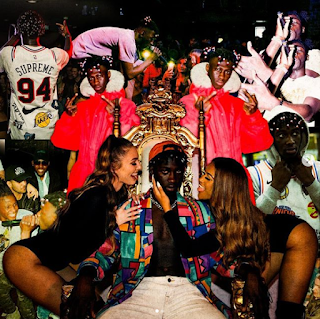 Philly-based rapper LiMM is steady grinding his way to fame after dropping one of the hottest projects of the year. At 20, he dropped his third full-length project on March 29th, 2019, accurately titled 'The Statement'. On the thirteen track tape, he showcases his wide range of flows, from high energy bangers like 'Swiper' to slower, R&B style tracks like 'Force Field'. LiMM offers Roddy Ricch meets Famous Dex realness in this NEXT UP PHILLY APPROVED tape.

The album begins with a thirty-second intro; a male voice, presumably LiMM, is playing a group of girls music and he asks if they want to hear 'rap' or a 'vibe'. This is really "the statement" in itself; LiMM can provide a fire song for any mood. His intro is a perfect prologue to what comes next.

The first track, No In-Between, produced by DAVEKEOUGH, tells a tale of getting 'drunk and high as fuck', cross-faded and flexing at it's finest. No In-Between showcases LiMM's vocals perfectly, the low-key vibe-y beat playing up his natural talent throughout the song.

Swiper is a particularly fire song, serving fun and fresh vibes. You may recognize Swiper, as it was released as a single in December of last year. His lyrics are playful as he talks about stealing girlfriends with ease over an upbeat track.

The Statement concludes with The Way It Is, produced by D3. The song tells of LiMM's rise to fame and how hard he's worked over the last three years. This song is backed up by his long list of accomplishments as a young artist - LiMM's grind can't be questioned, and that's The Way It Is.

LONG STORY SHORT; LiMM's most recent mixtape, The Statement, is totally fire and has a track for every setting. Stream it on Spotify here: https://open.spotify.com/album/7JutBri5Ar0FKTrxdDD3xX?si=7bnTSpqwT6eiozrWUw1SMw