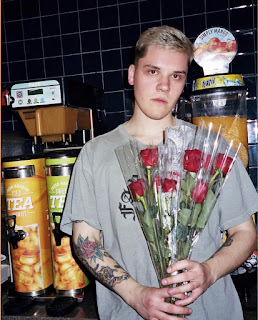 What is the music community like in your hometown? What is it like for you now to perform back home?

The music community in Wilkes-Barre is very DIY, very young, and mostly consists of hardcore kids. Hardcore has always been the thing here, and that's what people know Wilkes-Barre for, musically, for the most part. That's what drew me here in the first place.
Performing at home is always great. My first show was here with Wicca Phase, and the room was packed. Even though hardcore is the most popular type of music here, most people are very open to different kinds of music.

How was Misery Club formed? What was the experience of the first Misery Club show in Wilkes-Barre like for you?

Misery Club started as an idea between Zubin and I. We just wanted to form a group or collective of some kind. We didn't really know what it was, we just started putting the name on our stuff. Then, a few months later Zubin, Jon, Wicca, and I recorded some songs together and decided to call it Misery Club. Foxwedding and Nedarb produced the tracks, so we thought we'd just make it a 6 person group.
The Misery Club show in Wilkes-Barre was super fun. I used to work at the venue it was held at which has since been closed, so it's one of my best memories there. So many people showed up from all over the country to be there, I couldn't believe it. People flying in to come to this small venue in the middle of nowhere, Pennsylvania.

Are there plans for new Misery Club music or a possible tour in the works?

Right now everyone is insanely busy doing their own respective things, so I'm not really sure what the future holds. We've talked about wanting to do an LP, we just have to wait until the time is right. Touring would be fun but seems impossible given everyone's schedules. I'd love to, though. 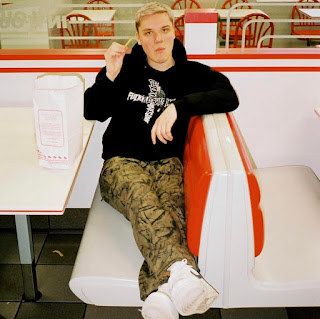 You have an upcoming Tour w Horse Head, Coldhart, Lil Zubin, Fish Narc, & Yawns. Is this the biggest/longest tour you've been a part of? What is it like to be able to tour the country with people you're so close to personally?

The Suffer On tour was the longest tour I've been on up to this point, but I think the Love Gang Forever tour is longer. Six weeks or something like that. Touring the country with my friends is the most rewarding experience and I feel so lucky to be able to do that. I don't think I'd be able to do it with people I'm not close with.

How did you meet GBC member Wicca Phase Springs Eternal? What has it been like working with him and other GBC members?

I met Adam through tumblr. I was a big fan of his band at the time, and saw he was working on an electronic project (WPSE). I had been making beats for about a year, so I asked if I could send him beats and it went from there. Working with him and the other GBC members in those early years was so fun because there were no rules or expectations on what the music was supposed to sound like. I really had free creative reign to be as weird as I wanted to be with the beats. Sampling also wasn't an issue at that point.

Are you working on any solo music? Are there any release dates you can share?

I have two EPs finished that will release this year. The first one, UNSATISFIED, should release this summer and the 2nd one, THINGS FALL APART, produced by Nedarb will release later in the year. I don't have specific dates on either yet.

What is your relationship with Lil Zubin like? What has it been like to grow in your music career alongside your friends?

Zubin is one of my closest bro god's. We've probably made like 50 songs together at this point. Growing musically with my friends has been really exciting to see and I wouldn't want it any other way. It keeps things interesting and I think we all inspire each other to work harder. I'm siked to see what the future holds for everyone.