Who is Splash? What's your story?

I am a hiphop artist from Roxbury, MA (Boston). After a traumatic near-death experience left me blind in my left eye and in a coma for 2 weeks-- I decided to put my all into my hiphop career and focus on peace and positivity and prosperity (Book of Gleeshy, chapter 2).

I’m 21 years old , my real name is Cesar Crespo . I was born in Ciales, Puerto Rico on April 26th, 1998 & moved to Massachusetts when i was 8 months old . I was raised in Ruggles Street Projects-- straight out of Roxbury, MA .

Part of my growing up experience was a hectic street life mixed with going to a prep school, Catholic Memorial, where I played basketball and did my best to keep up with the rigorous academics. The diverse experiences I have had allows me to show different perspectives and connect with people on all levels.

Before I transitioned to my rap career-- my nickname was “Mittz Romney” as a reference to my quick hands on the block.


How did what you went through change your outlook on life? Do you feel it changed your goals as a musician?

Waking up from a coma was a miracle obviously-- I felt like Wolverine.  It helped me change the people I was around and helped me realize that you only have yourself; “You don’t know how strong you are until being strong is the only choice you have.” unfortunately do to my mistakes ive made being influenced by the wrong decisions , all the negative energy i gave out definitely caught back up to me . i will always be gang member just because i got shot doesnt mean im gonna disown the only neighborhood of brothers who helped me survive in the streets,  just gangbanging isnt the energy i portray anymore i can say im done with the street life all i want but the street life will never be done with me . Getting shot helped me realize & opened my only eye see that you get back what you put out in life .


What was the significance of dropping your self-titled album on May 13th?

On the anniversary of the tragic event of getting shot 9 times—I released my first self-titled album (SPLASH) as a turning point in my life. It’s significant to me because the event left me with THE questions: “why i was shot”, “why was i blind”... ” why me?!?“ . It took me a long time to find myself and learn to deal with knowing that what happened to me was for a reason and wouldn’t be the defining moment of my life.

I struggled to find happiness; it was harder than ever to try and find love in life again. I willingly spent months after being released from the hospital in psychiatric treatment trying to find help on how to cope with all of these new mental illnesses I’d never heard of before. I struggled a lot also from how much i didn’t want to deal or bother with being a newly blind. It took me even longer to feel comfortable with how I looked and to lose my insecurities of the absent eye look .

Not everyone knows as to why I’m blind until I tell them or they hear my story, I live to show everyone how great my energy is & how much ambition I have to make music and enjoy life after going through something so tragic. I hope my journey inspires my real supporters to never give up no matter how tough things can be . 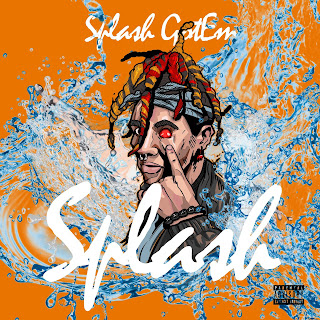 How would you describe your sound to someone who's never heard your music before? What's your vibe?

My sound forces/makes listeners take their minds and energy to an electrifying place where all they can do is jump around & become as happy as i do when I am making my music. I am jumping on the beat and bringing what I would consider my style to be within the new age trap rap; however, I am continuously growing and expanding my versatility which I look forward to showcasing.


Do you have any shows or merch announcements dropping soon?

Exclusive album merch has been given away at my album release party and also through my social networks. We will have new merch on sale within the next few weeks.

I performed on Friday May 10th at Sonia (see attached video), right before the album drop, and have plans for more shows and touring.


Do you have plans to drop a video for any tracks on Splash?

Yes. With 3 dates already booked for shooting the videos-- I am very excited to show the visions behind my words and art. I’ll definitely be doing one of the singles.. that’s all I can say.