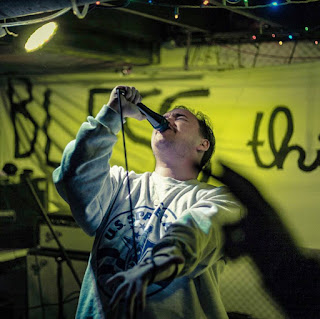 Where are you from? How do you feel your hometown impacted you as an artist?

I grew up in Jacksonville, Florida AKA Duval.
I feel like my open-mindedness came from growing up there. There are a lot of different people from a lot of different walks of life all in one place. You could literally go from hanging out in a trap house to a mansion to a farm to the beach all in a 20-minute drive. Shit is crazy. I feel like the influence came from the people. The scene there was rooted in pop-punk and metal because Yellowcard and Limp Bizkit are from there. I grew up in a time where crunk music was what was poppin off at school dances, and trap music is what you played in the car everywhere you went. I went to shows in warehouses, nightclubs, coffeehouses, house shows, and even farms. Shit was honestly crazy. I feel like the melting pot of different cultures is what affected me the most. If I had it my way I would buy some permanent gold teeth, rock a scene mullet, and open a hookah lounge. Those are just a few things I think about when Jax comes to mind. Everything is mixed together, and that's how I like to make art. I've lived in Philly for 9 years now, and Jax will always have its fingerprints on me.

Tell us about your most recent released project. What did this project mean to you?

"Beautiful Mess" is a project I made about getting clean. I wanted to make this short little arc of when I was using, getting clean, and staying clean. The project starts in a dark place and ends in one that's more hopeful. And that's not to be cheesy that's just what happened to me at the time. The album pulls from a lot of different genres including trap, metal, emo, pop-punk, powerpop, garage, darkwave, and I'm sure there is other stuff I can't think about right now. It's kinda the keystone to me finally leaning into being myself with my music. When I was using sometimes I felt like I was a persona instead of who I truly was. I was being who I thought you wanted me to be and trying to be who you didn't want me to be. Now I'm just being myself. It feels like my first cohesive project where I'm taking a look at myself, and not pointing a resentful finger at the audience. This project is always going to have a special place in my heart. And shout out to Plead The Filth for executive producing it! Shout out to D.Wild for playing guitar on it! And should out to Wilson, Gregory for producing Unstable!

How would you describe your sound to someone who's never heard your music before?

Every track is going to sound different. A song like "Rehab Shawty" is a track the straight-up sounds like it's "The Strokes" with Auto-Tuned vocals over it. A song like Bloody Mary that sounds like Brokencyde with 808s and metal guitars. A song like "Florida In The Winter" where the beat is very much that emo trap wave with the guitar and trap drums, but the vocals are made to sound like The Postal Service. Some people have given me some comparisons to Say Anything or Hellogoodbye. Those are huge compliments to me because I was influenced by those artists a lot growing up. I would say just expect some mixing of genres, and no two songs to sound too similar to each other.

Do you have any music or visual release dates coming soon?

I've got a music video that I directed for People Eating fruit dropping later this month.
I'm directing a video for Alex Stanilla.
As far as personal stuff I'm working on a project about growing up in Florida that will probably be out by December.
I've got some videos in the works for my own music with no set release date as of right now.

What Philly artists would you love to collaborate with?

I'd like to work with 4VR and Sami Rahmen. (Who are already my friends, but we just haven't gotten around to it!)
I'd like to work with Rego even though I don't know her. I fuck with her music. There's really fire imagery, and word choice she's got going on. Also, her voice has this wild opera sound. It sounds like a mix of like Bjork and Evanescence. She's also friends with 4VR and Sami Rahmen.
I gotta work with all of those people lol.

What's next for you?

Two things.
1. I'm planning a triple weekender tour going west, south, and north from the end of August to the middle of September.
I'm calling it the Weekender Warrior Tour! It's always exciting to hit the road!

2. I'm writing this new project about Florida. It might be a series of EP's or singles or one big project. I'm not sure, but it's cool to explore some memories and keep experimenting with combining different influences.