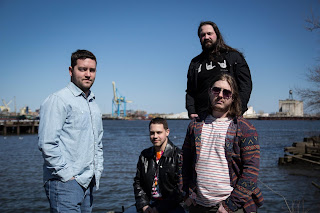 The raw, no frills hard rock band, Primatives formed in 2012 and hail from Haddon Township, New Jersey. The group consists of Kyle Ranshaw, David P. Harvey III, Andy Buch and James Berardi. Unapologetically taking influence from 90’s grunge ensembles and thrashy medal bands, Kyle Ranshaw aims to match the guttural vocal style of his contemporaries which pairs nicely with the grotesque imagery of pigs eating pigs, found on their 2018-self titled album. The trend of Primatives’ “loud, fast, hard,” sound continues on their sophomore record “Shades of the Past.” Despite the album being shelved since 2016, the band looks to release this work in 2019 starting with the lead single “Steal Me,” sung by David P. Harvey who shares lead vocal responsibilities. The "loud enough to piss off (your) mom,” quartet look to independently release their follow up record along with newly written material this year.

Where are you from? What does your local music community mean to you? Do you think where you’re from has an impact on your music?

¾ of the band are from Haddon Township, NJ. Growing up only a 15 minute train ride from Philly definitely was a plus for us. Any band you want to see comes through Philly. So we got a first hand look at what great bands look like on stage.


Who are some of your biggest inspirations?

We take inspiration from as many types of music as we can. All the greats have always done that and we follow their lead, but our biggest influences are Nirvana, Foo Fighters, Misfits, The Beatles, Sabbath, Zeppelin, Queens of the Stone Age.

How would you describe your sound to someone who's never heard your music before?

Our sound is groovy, tenacious and has an aggressive attitude. We use swinging guitar parts with break neck changes, melodic vocals, thundering drums and a fat bass. Combine those elements with a raucous stage performance and you’ve got Primatives. 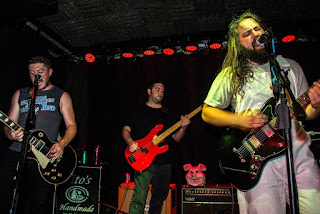 On July 26 we release our second record “Shades of the Past.” It’s been a long time coming for this one. We finished recording and mixing this record 2 years ago and it’s finally the right time to set it free. It shows a giant growth from our previous self titled record. While keeping the aggressive sound, we have expanded on our songwriting and added David Harvey III’s voice to share in the Lead vocal responsibilities.

Being able to work with Josh Homme would be a dream. There isn’t a song he’s been a part of that you can’t dance to. Qotsa, Them Crooked Vultures and Eagles of Death Metal have been some of our favorite bands for a long time and the guy is always doing different things with his songwriting and recording.

We are happy with our current schedule of playing a big shows every month or two and filling in with smaller shows. There’s a pretty good rock scene starting here in Philly with bands like Andorra, At Best, Adventure Lost, The Stone Eye and a ton of other bands. We are having a great time enjoying all the awesome bands on the rise here in Philly.

What’s next for Primatives?

We have had lots of time to write new material over the last couple of years. So as soon as we are ready to get back in the studio, there will quickly be a new release. It’s time right now to get the “Shades” record to as many ears as possible. A strong effort to get radio stations and streaming playlists to play our music is currently where our energy is at, along with playing awesome shows.