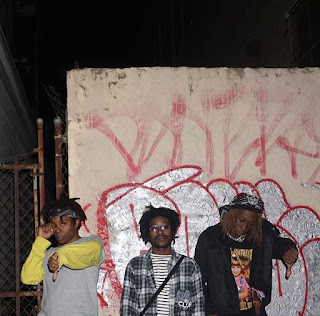 RageLordRecords originated in late 2014 when the starting name(s) for the collective were “GoofSquad” & later changed to “Blxvk Rebllion”. Which did not stick too long thus creating the name RageLordRecords. RLR was started by me (KarnVge Jey) & GhostTheRapper in high school. Yet the two other founding memebers that helped mold RLR to what it is today are Lionel (Dj Deity) & Aji (ThirdEyeLegacy). RLR came from the idea of taking on a new form of rage. We rage hard for what we love and believe in. There’s more to raging than moshing and going stupid at shows (even though that’s what we crave and do the most haha). It’s also putting almost everything on the line to take that intense energy and release it into whatever you do creatively. Even though people tend to see me (KarnVge), as the face of the lords. In all actuality this wouldn’t be the same without each member.

RLR is known for high-energy performances. What has been your favorite show together so far?

We have had a lot of great shows within the past year or so. Not every show was our favorite but there are some that stick out to each of us individually. One show in particular that was my favorite was when we opened up for Xavier Wulf (February 1, 2018). The crowd was going crazy and we were the 1st opening act. Mind you, not all of our current members were in the group at that time. Although, as we went through changes and re-evaluation the shows started to get better & better.

You guys recently threw the first RLR & Friends. What was that experience like? Do you plan on continuing these shows?


RLR + Friends is a show that we decided would be a new way to branch into our “in-house show” wave. For example, when our bigger event “RAGE FEST” started, it set off a new era in Philly’s underground music scene. So to sum it up RLR + Friends is the offspring of RAGE FEST. We plan on doing more of RLR + Friends in the near future but we are focusing more on our RAGE FEST shows since they are on a bigger scale & take more time to plan.

Will there be a full tape or album with all members of RageLord in the future?

There definitely will be a RageLordRecords album coming in the future. At the moment, everyone is working on solo projects to better develop our own individual and collective music. In early 2018, we released a compilation album titled “The Chaos Tape” which was more of a collection of songs and beats from each member at the time. We plan to start working on the RLR album towards the end of summer/ early fall. So expect the album to be out probably around Spring 2020. 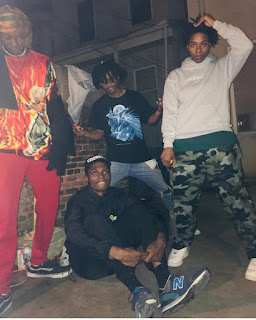 Can we catch you at any shows coming up?

Catch the gang August 3rd at Next Up Philly Phest. We have a nice set for any & all ragers/rappers. With also another RLR + Friends show in early September.

Do any members of RLR have new music dropping soon?

A few artist within the collective are planning to drop some heavy hitting music. For instance, Wan (Ak Wanny7) will be releasing his first major project “THE BLACKTAPE” on July 19th. Irk (IrkTypeBeat) is also working on an album that is soon to be released with some production from our very own Moody (Moody56k). Who recently released his self produced tape “Moody2Moody2”. KWON (Ayekwon) is currently working on a new project produced entirely by RLR affiliate Bazi (@whoissomedude). A new tape is on the way from me (KarnVge) titled “ANTI-ANGEL” that continues (The Story Ov KarnVge). Along with a beat tape under the moniker FATHER EVIL. So overall, there will be a lot of new music from each of us within the next few months, leading into the new year.

What's next for RLR?

Our next ventures will include the fifth installement to our highly anticipated show RAGE FEST Vol. 5. This time around we are planning to not only make this a multi day event, but to also include some major names to be apart of the show. We are also in the process of signing under a distribution company to help push us even further in our journey of independence. Can’t say too much on everything just yet, because things are in very early development. Although what we can say is that all of our supporters/fans inspire us to keep going and make music that WE love and music that they’ll love.