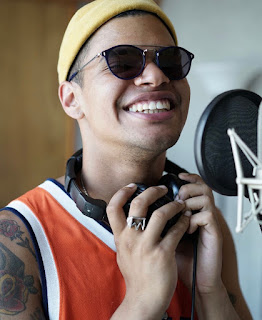 Who is LUCKY! ? What's your story?
The name has a few meanings, my uncle Fred always used to yell “Ayo LUCKY” whenever we had a family thing going on, he was never not happy to see me. I also want people to be happy listening to my music.
The second meaning was starting over, there was a lot going on and I had to hit the reset button, rebrand myself, and start over. LUCKY! matched that move the most.

Where are you from? What does your local music community mean to you?
Born in the Bronx but raised in Mahopac, NY. I’m now living in Harlem. New York means the WORLD to me. There’s so much art, music & culture out here it’s hard not to get inspired.

Who are some of your biggest inspirations?
Kid Cudi is my favorite artist, I related so much to his music because he was talking about the struggle of being out of place & being stuck with the thoughts in his head. It made it okay to rap about love & emotions. A couple others I want to mention are Wiz Khalifa, Pharrell, Bryson Tiller, & Drake.

How would you describe your sound/vibe to someone who’s never heard your music before?
That’s always been tough because I show all sides of myself in my art. I’d say artsy-romantic rap music lol, or Drake & Cudi put in a blender.
Sometime I’ll make songs to inspire, other times I’ll make stuff just to smoke and chill too.

Tell us about your most recent release. What does this project mean to you? What was your inspiration?
BUTTERFLIES! Ahhh one of my favorite songs I’ve got to work on. The first line came from a text message I sent to a girl I was dating “you know what door to knock/number to text”. Jake killed the beat, Aurora nailed the vibe with the cover art as well. The song is about the vibe you get when seeing someone new. I really got into my feels on that song for sure. It’s the third single off my EP “GoodLuck!” releasing 8/30.

Do you have any new music or visuals dropping before the end of the year?
Hell yeah!!! I’m actually shooting a video this weekend, dropping a lyric video for “Butterflies” on Monday & will release videos after the EP is released..

Who are some of your dream collaborations? Are there any local artists you would love collaborate with?
Too many! The first that come to mind are 2 Chainz (name me a feature he hasn’t killed, I’ll wait). Pardison Fontaine is from the 845 so that’d be a sick collab.
As far as indie NYC scene, I’ve been trying to get a song with this battle rapper named Trey30 & Young Gemini. They're dope dudes and we’ve talked about working but nothing yet. Also my homie Diana Bidéa, we have 3 songs written and haven’t hit the studio yet.

Do you plan on performing live more often the second half of this year?
Yes! It’s my favorite part of being an artist, I feel like I connect more with people in person & get to be myself the most. I’d like to open for some bigger artists, get the party started & share my sounds with a bigger audience.

What’s next for you?
After the EP I want to release more visuals, then get ready to release part II of the EP “BadLuck!,” also just connecting to more fans & hustling. I really love the music & moves my friends and I have been creating. So I just want to keep that energy moving and build something special.