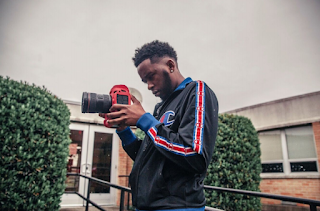 Jacques Dupre, also known as his Instagram handle, ShotByJacques, is a 23 year-old photographer and videographer from Upper Marlboro, Maryland. Jacques has been taking social media by storm due to his endless list of accomplishments, including shooting for NBA Youngboy, Yo Gotti, Moneybagg Yo, Cardi B, and more big-name artists; and has been published in XXL, Essence, Complex, Genius, iTunes, and more publications. His natural eye in photography and his outlook in life makes him different from the rest, and his success is the proof.

Growing up, Jacques was an inspired and adventurous - traveling all across the world and moving around constantly with his family. As a kid, he spent time living in Germany and speaks both German and French fluently. After traveling through Europe, playing sports and riding dirtbikes, he moved back to the states to Maryland for his first year of high school.

Jacques bought his first camera, a Canon 7D with a 24-105mm 4.0 lens, in his senior year of high school for a required class, but Jacques’ photography truly took flight in his junior year of college at Hampton University, where he majored in Computer Information Systems. He knew he could turn his favorite hobby into a life-long career when he met with legendary photographer Cam Kirk, who inspired him to become even more passionate about his craft. Today, he shoots with a Canon 1DX Mark II.

The first show Jacques shot was in 2016 for Lil Uzi Vert. He finessed his way into the concert with his camera after he forgot to buy a ticket to the show, and made it backstage to meet Uzi and take his picture. He knew after that night that this is what he was meant to do.
One of Jacques’ favorite artists to work with is NBA Youngboy. He met Youngboy through his sister’s friend before his rap career took off, in Baton Rouge, Louisiana. They linked again in 2017 when NBA went on his first tour and came through the DMV. Jacques had to fight his way through security to get backstage and connect with Youngboy’s manager; and he’s been shooting for him ever since. When Jacques graduated college, he spent his first six months out of college traveling with NBA Youngboy and shooting for him. They’ve developed an incredible bond over the years and push each other to do better in life.

The highlight of Jacques career (so far) is the time he was shooting for Cardi B in 2017 at Made in America festival and captured the moment she met Beyonce for the first time. The photo went viral online and Essence Magazine published it. Around the same time, Jacques met Yo Gotti, who asked him to be his personal photographer. The same year, he went to the Roc Nation Grammy Brunch with Gotti and met Jay Z and Beyonce again; taking a legendary photo of Jay Z and Gotti using an iPhone camera.

Today, Jacques is traveling the world shooting for the biggest artists in the game and working on taking off his production company, We Good Productions LLC, in which he will connect the music industry with incredible photographers and videographers like himself. To upcoming and aspiring photographers, his advice is to never stop shooting - one of those bullets are going to hit the target!