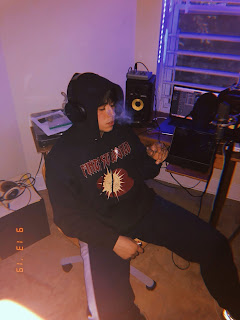 Born and raised in Philadelphia to an immigrant family, I have always been surrounded by music and artist my entire life; both family and friends. At age 13 i went to visit my family in Russia and thats when i realized for the first time that i wanted to be a musician. I was inspired by the gracious gospel music they played at the red square, a very raw sound that appealed to me very much. Coming back to the states i met some friends and we started a collected called FIFFLO. All of us are artists in one way or another, and we all get together to produce creative and cool content.

Local support and love is everything. You can be from philly and make any type of music really. Whether its trap, boom bap hip hop, alternative indie rock, whatever it may be, if its philly than its philly. And if the people rock with it, they gonna let you know. I hope philadelphia really blows up soon, we got a lot of strong raw talented coming out of the city.

Frfr people just think im some random white boul from the burbs, but im really not. I really be down here and i really be doing this music shit heavy. No bullshit no gimmicks, my cards all in. Dropped college for this shit, gotta mean its in my soul.

My last project was a mixtape called headband n friends. Every song but 1 has a feature, all the features are from my friends and i had the best time putting that projetct together. Soon, FIFFLO will drop another tape called “1619” that we will produced entirely by ourselves.

I love making music with my friends. Some of the best songs happen from that, and its a very pleasant time to be in the studio with my guys. My dream collab would be an Earl Sweatshirt produced beat, or a feature from Isaiah Rashad.

All the bouls from ox are tuff as fuck. Really hope desh drops some music soon, flacko been dropping some heat. Cashier Fresh been a legend since 2015 hopefully he blow up big big soon, he deserve that for sure.

Keep and eye out and youll find out.