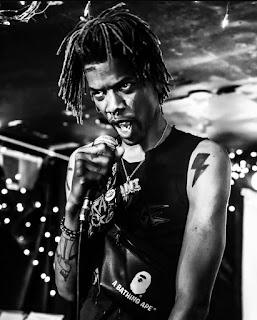 
I was born in Gulfport, Mississippi. I spent ages 10-17 in Kansas City. At 17, I moved back to Missssippi then I dropped out of school and went to trade school and got my G.E.D. after that, I went to college, then dropped out by moving to Philly and never going back. Met all the punk kids in philly one day and moved into The Fish Flat. I’ve always been involved in making music from a very young age, from brass in elementary to punk bands throughout high school. After leaving the band FTS back in 2014 I took up production thinking I would make an indie ‘TV On The Radio’ type situation. That shit turned into a couple hip hop tracks about a year later them ... boom, King Ani Mal.


What does the local music community mean to you?


I only really know the local punk community and without them I wouldn't be where im at today. Shout out South Philly punks!


Who are some of your biggest inspirations, both locally and mainstream?


What’s one thing about you that you think is misunderstood? What do people not know about you, or one thing you want people to know?


Bam Bam By Toots and the Maytals is about me.


Tell us about your most recently dropped project, or an upcoming project.


I just released Turbo Deluxe Edition, a 14 Track Album, available on all major streaming platforms. Everything is done in house featuring Keko, TM Legend, Deuce Flame, and Sunshine Rob. This album got picked up by Suicide Bong for a limited Cassette relese.
Pull up to the release show December 7th at Century bar in South Philly get a free tape with entry!


Honestly I'll collab with anyone if the vibe / bread is right but i'm manifesting a 2Chainz collab for sure, I can hear him on every track I make.


What has been your favorite project you’ve released so far, or the one you’re most proud of?


Turbo Deluxe Edition for sure followed by Skinny God.


Who else in our community do you think is Next Up?


Probably Shaq G or T$an - they both have some dope shit going on.


What’s next for you?